Disclaimer: All climbing pictures are of me in 2016.Seeing as last weeks week in the life went down so well I thought this weeks post should be another week in the life, so without further ado lets start.

Monday came, as Monday always comes. I had work cause 9-5 life so of course I did and blew up some balloons and did some more shadowing. I also noticed that I was feeling a lot more settled than I did last week, which was nice. I cancelled by BT contract and ordered a data dongle (which hilariously got delivered home home) I had climbing in the evening as a signed up to a technique coaching which was really chill and a really nice refresher of all the things I know but are really hard to put into practice once your on the wall and panicking. I also pushed myself put of my comfort zone and achieved things I wouldn’t have been able to do when I was stronger a few years ago because they would have been so far out of said comfort zone. I used to do V5s on slabs but put me on an overhang and no. Now I’m a consistent V1-3 (almost). It makes me really happy to see how much I’ve come on just in a few weeks really! I’m not amazing but I’m improving and trying my best and that’s what matters. 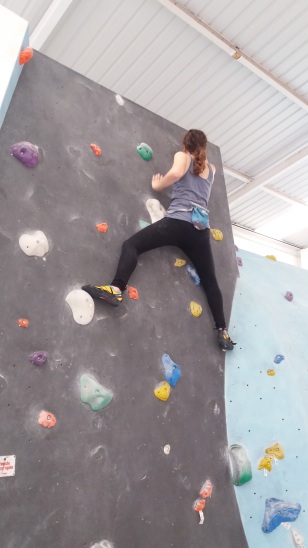 Tuesday we won fourth place for our decorations at work. I did more cutting, more shadowing and we had a few snowball fights. My endo pain was really bad on Tuesday and not in that sort of majorly overcompensaty way but in that I’m kind of overcompensating but also very easily irritated and if you know me well enough very much showing it. I came home roasted some veggies tried the quorn chicken fillets which are the closest thing to chicken I’ve had without actually being chicken. Blew my mind. When looking to try and empty my dropbox I found my graduation – realised just how cringe I look just before I go up the 2nd time. Deffo not TV material nor photogenic. I then found it funny that me. Me of all people graduated top of the class. If you think about it, I spent most of first year unable to sit through 30 minutes of a class without beyond excruciating endometriosis pain cause it really affected my bladder at the time. I then relapsed into ME and ended up largely bed bound. It was thanks to my uni being so helpful and moving me to the centre of campus for third year that I could attend any lectures atall. I fought through severe pain, pain I cannot deal with now without getting close to losing it. I’m honestly so proud of myself. I may not have a graduate job but that’s okay. I know I will one day.

Wednesday was hell on earth. I didn’t really have anyone to talk to at work cause of where I was sitting and my assigned reading took an hour. With the extra reading I assigned myself another hour but it was v boring and v slow although I was fortunate enough to get told to go home early and being the team player I am – I posted a letter on my way home. I feel like my line manager is a bit too touchy feely false nicey. But I don’t know. Such is life. I seem to attract people like that. Like seriously so I’m used to it and I’m happy and once I start doing actual work I’ll be happier. My endo was causing some kidney pain in my right kidney (well presumably cause the patterns of pain) and my left ovary and I partially dislocated my right ankle on my way home. I went climbing and we did some dyno work and I tried campusing for the first time! It was very fun although I have no upper body strength so had to rely on swinging alone and as a result couldn’t get far. The campusing also caused my endometriosis to flare and lead to some intense pain from kidneys down.  I also did two blues (so like V2/3 ish)  that I couldn’t do on Monday and I did them with ease. Funny that isn’t it. Also story of my life. Can’t do something one day, flashes it the next. 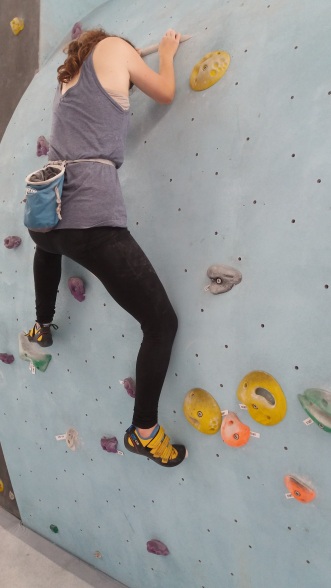 As a result we sported the sleep deprived Han on Thursday. And v nauseous and ya know when you start getting those contraction like pains in your uterus. That was me. But I had log ins at work. Worked numerous cases and asked if I needed to go home more than once but did I actually go home early? Nah. The thing with being chronically ill is that it can always get worse. And what then? Working full time with them is about utilising those sick periods and sick days carefully. And do you know what, it’s a balance I need to learn to strike. I’ve been working full time (different roles) since August and not one sick day yet, I plan to keep it that way although what with me wanting a gyne referral and a laparoscopy it won’t. And the nature of chronic illness in general is that it won’t. But a     girl can dream. I got home, tried to get some nutrition in me and then felt beyond unbearably sick so didn’t move all night. It had fortunately eased before sleep time though because otherwise it would have been another sleepless night.

Friday I didn’t feel great when I woke up and wasn’t sure if it was PEM from the climbing sesh on Wednesday starting or just my ME being it’s usual self and interrupting with my mornings. We had a team pizza lunch at work which was nice and I definitely established that my ME symptoms were PEM throughout the afternoon. I literally came home. Napped. Got up to get food and ended up stuck on the floor. So yah PEM.

Fair to say I then didn’t get out of bed until 10am this morning! I’m currently in the library to upload this and do some application work then I’ll go back home and rest and probably make Christmas cards to keep me occupied as I don’t think I’ll be well enough to read the challenging book I’ve started and I only decided to make xmas cards today! With 4 days to go. Yes I know my stupidity.

One more climb before Christmas! Likely Monday after work as the climbing bug has hit me hard again. And I would miss it too much otherwise. Will take it easy if I’m half as pre-syncope like as I am today but gonna go!

Happy holidays everyone. I’ll be back next week with the big 2019 post!